JVM (Java Virtual Machine) is an abstract machine or can say it is a software implementation of a Physical Machine. It is a specification that provides runtime environment in which java bytecode can be executed. JVMs are available for many hardware and software platforms (i.e. JVM is platform dependent).

JVM provides definitions for the:

How JVM works in Java? 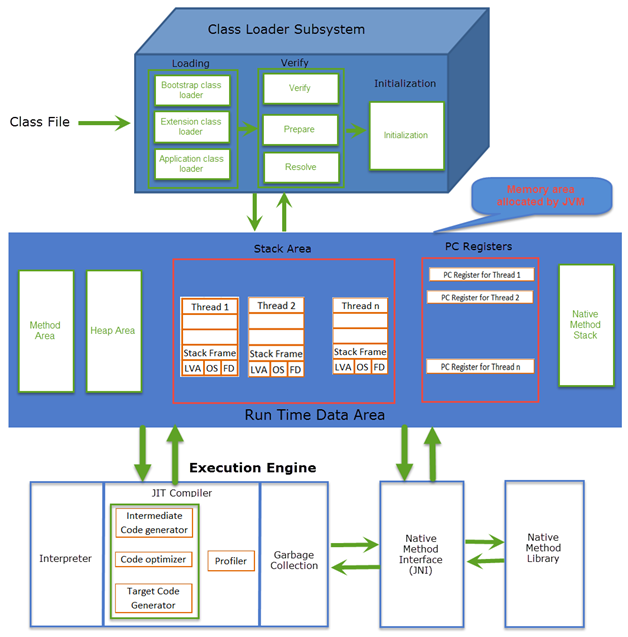 Classloader is a subsystem of JVM which is used to load class files. Whenever we run the java program, it is loaded first by the classloader. Java’s dynamic class loading functionality is handled by the class loader subsystem. It loads, links and initializes the class when it refers to a class for the first time at runtime, not at compile-time.

Boot Strap ClassLoader:- Highest priority will be given to this loader.

If both CLASSPATH and -cp are missing, “.” (current directory) is used. 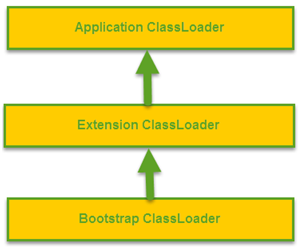 This is the final phase of Class Loading, here all static variables will be assigned with the original values, and the static block will be executed.

The Runtime Data Area is divided into 5 major components:

Java Native Interface (JNI):  JNI will be interacting with the Native Method Libraries and provides the Native Libraries required for the Execution Engine.

Native Method Libraries: It is a collection of the Native Libraries which is required for the Execution Engine.

In this article we will discuss the memory model and it’s management in java. This will help you to better understand the concept of Java Garbage collection. 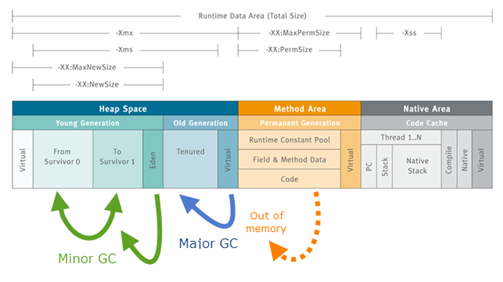 Most of the times, above options are sufficient, but if you want to check out other options too then please check Java HotSpot VM Options.

PermGen is replaced with Metaspace in Oracle/Sun JDK8, which is very similar. The main difference is that Metaspace can expand at runtime.

Classes may get collected (unloaded) if the JVM finds they are no longer needed and space may be needed for other classes. The permanent generation is included in a full garbage collection 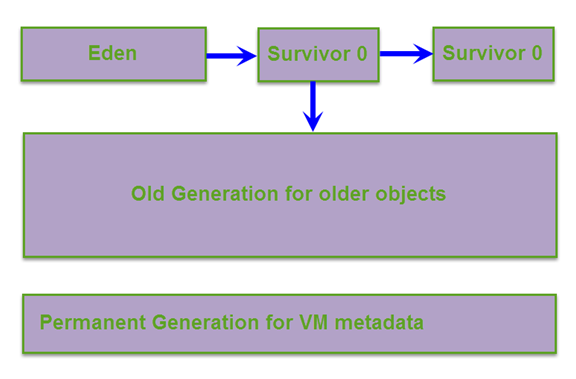 After Metaspace is introduced 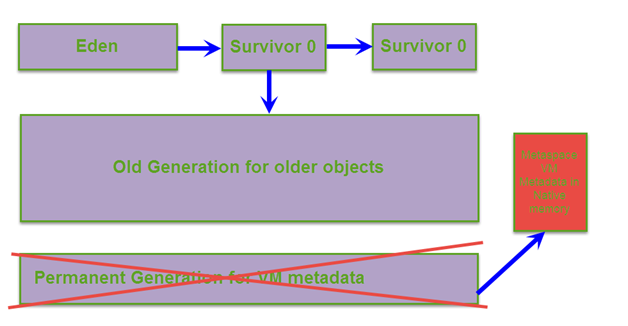 This memory is out of heap memory and part of the native memory. As per the document by default the meta space doesn’t have upper limit. In earlier versions of Java we call this as “Perm Gen Space“. This space is used to store the class definitions loaded by the class loaders. This is designed to grow to avoid the Out Of Memory Errors.  But, if it grows more than the available physical memory, then the operating system will use virtual memory. This will have adverse effect on the application performance as swapping the data from virtual memory to physical memory and vice versa is costlier operation. We have JVM options to limit the Meta Space used by JVM. In that case, we may get out of memory errors.

The Permanent Generation (PermGen) space has completely been removed and is kind of replaced by a new space called Metaspace. The consequences of the PermGen removal is that obviously the PermSize and MaxPermSize JVM arguments are ignored and you will never get a java.lang.OutOfMemoryError: PermGen error.

The maximum metaspace size can be set using the -XX:MaxMetaspaceSize flag, and the default is unlimited, which means that only your system memory is the limit. The -XX:MetaspaceSize tuning flag defines the initial size of metaspace If you don’t specify this flag, the Metaspace will dynamically re-size depending of the application demand at runtime.

Change enables other optimizations and features in the future 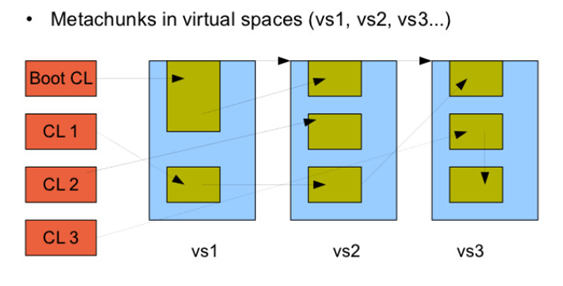