In this lesson, we are going to explain the core Java Architecture.

Java
Java was conceived by a team of engineers in Sun Microsystems in 1991 as a part of a research project, which was led by James Gosling and Patrick Naughton.
It was initially called Oak but was renamed as Java in 1995. This is designed to be small, simple, and portable across platforms and operating systems, both at the source and at the binary level, which means that the same Java program can run on any machine.

Java is an Object Oriented Language. Object-Oriented design is a technique that helps the programmer visualize the program using real-life objects.

Java has solution to these problems.

Java is platform independent i.e Architecture Neutral / Portable (The idea behind it is – Write once, Run anywhere)

Java is an Interpreter based language. With Java, the program needs to be compiled only once, and the code generated by the Java compiler can run on any platform.

Java is platform independent at both the source and the binary level.

Java can be easily ported on any type of system and irrespective of the operating system being used. Java achieves this portability due to its feature of Implementation Independency.

Java is a secured programming language because it provides the user with a Virtual Firewall between the applications and the computer thus ensuring that the data in the user’s system is protected by any possible Infectious contents. This is achieved by confining the Java program within the Java Runtime Environment.

Multithreading is the capability for a program to perform several tasks simultaneously within a program. A good example of mutithreading would be one of the game software where the GUI display, sound effect, timer control and score updating are happening within the same process simultaneously. In network programming, a server can serve multiple clients at the same time via mutithreading.

Java is designed for the distributed environment of the Internet. Java allows objects on two different computers to execute procedures remotely.

Java is a language that is platform independent. A platform is the hardware and software environment in which a program runs

Once compiled, code will run on any platform without recompiling or any kind of modification. This is made possible by making use of a Java Virtual Machine commonly known as JVM.

The source code of Java will be stored in a text file with extension .java

The Java compiler compiles a .java file into byte code. Byte code is a binary language.

The byte code will be in a file with extension .class

The .class file that is generated is the machine code of this processor.

JVM varies from platform to platform, or, JVM is platform dependent

JVM can be considered as a processor purely implemented with software.

The interface that the JVM has to the .class file remains the same irrespective of the
under lying platform.

The JVM interprets the .classfile to the machine language of the underlying platform.

The underlying platform processes the commands given by the JVM. 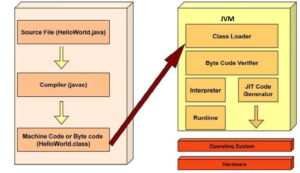 The byte code are stored in class files. At runtime the byte codes that make up a java software program are loaded, checked, and run in an interpreter. The interpreter has two functions: it executes bytecodes, and makes the appropriate calls to the underlying hardware.

The class loader loads all classes needed for the execution of a program. The class loader adds security by separating the namespaces for the classes of the local file system from those imported from network sources.

Once all the classes have been loaded, the memory layout of the executable file is determined. At this point specific memory addresses are assigned to symbolic references and the lookup table is created. Because memory layout occurs at runtime, the java technology interpreter adds protection against unauthorized access into the restricted areas of code.

Java software code passes several tests before actually running on your machine. The JVM puts the code through a bytecode verifier that tests the format of code fragments and checks code fragments for illegal code i.e. code that forges the pointers, violates access rights on objects, or attemptsto change object type.

There are no access restriction violations.
The code causes no operand stack overflows or underflows.
No illegal data conversions

When certain objects are required to perform some action when they are destroyed then those actions can be added by defining finalize()method.Java Runtime calls that method whenever it is aboutto recycle an object of that class.

The GC runs periodically, checking for objects that are no longer referenced by any running state or indirectly through other referenced objects. Right before an object is freed, the Java Run time calls the finalize() method on that object.