Using postman we also can write test cases or build request using java script code. This code can use dynamic parameters, variables, or pass data between different requests. It allows us to write javascript code at two events:

Script can be written at Collection, Folder or request level so questions comes what will be order of execution. To understand that let’s see this picture:

Here I am describing test cases using newer PM API (pm.* API). Though Postman still supports old postman API but we should use newer one so that in case postman deprecate old API we don’t need to invest in maintenance.

In previous article I already covered logging options in Postman which can be used in both Pre Request and Test script. Use console for debugging.

In case request is need to required input which will be served from previous request in that case we can first check if required value is populated or not. If value is available then only request should be sent else move to next request.

JavaScript
As we used setNextRequest so lets discuss it in details. We can set any valid request name or null. In case of null execution will be stopped. If we pass any request name (like postman.setNextRequest(“request_name”)) then named request will be executed. There are some important facts which we need to consider before using setNextRequest.

This is main function used for writing the test cases. This function accepts 2 parameters, the name of the test (as a string) and a function to return a boolean value. It can be used only in the Tests tab, after the primary Postman request has been sent.

The pm.expect() assertion function was built on the shoulders of the popular JavaScript test library ChaiJS BDD. Using a similar syntax, pm.expect() makes it easy to write readable tests, and you can deal with assertions of data from a response or variables.

You can see the script result in result section under Test Results tab. In parenthesis it will show Pass Test Cases/Total count of test cases.

Postman makes the process of writing test script easier by listing commonly used snippets next to the editor. You can select the snippet you want to add and the appropriate code will be added to the test editor. 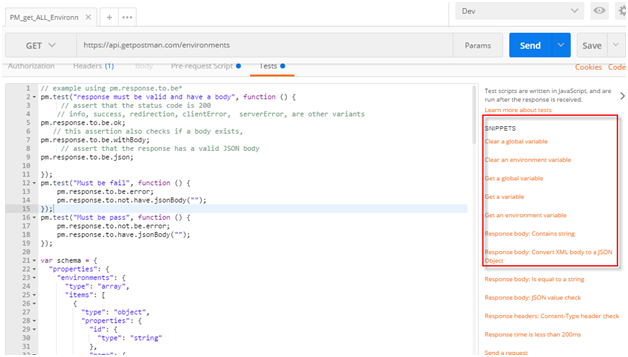 How advanced is your team when it comes to testing?

Writing tests – Most people agree that writing tests is important, but writing the first test is sometimes the biggest hurdle to testing. Once you’ve written your first test, every subsequent step becomes infinitely more manageable.

Code snippets – The first step is to use code snippets. These stubs demonstrate how a Postman test runs, how they’re structured, and show test results.

Custom tests – The next step is to write your own custom tests. Use JavaScript to address common user flows and edge cases unique to your endpoints.

Run the collection – Now it’s time to run your requests, along with their respective tests, together as a collection. There are several ways to run your tests – e.g. Postman’s collection runner, Postman’s command line tool Newman, or with a Postman scheduled monitor.

CI / CD integration – If your team is churning out code, the last thing you want to do is manually run these tests every time someone has a bug fix or feature update. When in doubt, automate!

If you haven’t progressed to Step 5, keep investing in testing.

string
When a variable’s type is set to “string”, it ensures that Variable#get converts the value of the variable to a string before returning the data.

boolean
A boolean type of variable can either be set to true or false. Any other value set is converted to Boolean when procured from Variable#get.

number
A “number” type variable ensures that the value is always represented as a number. A non-number type value is returned as NaN.

any
Free-form type of a value. This is the default for any variable, unless specified otherwise. It ensures that the variable can store data in any type and no conversion is done while using Variable#get.

Here is example to verify the data type:

Here are some more examples from postman site:

Setting a nested object as an environment variable

Getting an environment variable

Getting an environment variable (whose value is a stringified object)

Get a global variable

This function searches for the variable across globals and the active environment.

Check if response body is equal to a string

Check for a JSON value

Response time is less than 200ms

Use TinyValidator for JSON data

JavaScript
Another example for TinyValidator with complex JSON

TIP: You can use online tools (For ex: https://www.liquid-technologies.com/online-json-to-schema-converter) to create JSON schema from json output.

In next article we will discuss how to use collections effectively.

17 thoughts on “Writing Tests in Postman”