Agile is a software development methodology to build software incrementally using short iterations of 1 to 4 weeks so that the development is aligned with the changing business needs. Whereas the traditional “waterfall” approach has one discipline contribute to the project, then “throw it over the wall” to the next contributor, agile calls for collaborative cross-functional teams.

Agile isn’t defined by a set of ceremonies or specific development techniques. Rather, agile is a group of methodologies that demonstrate a commitment to tight feedback cycles and continuous improvement.

Disadvantages of the Agile Methodology

Teams choose agile so they can respond to changes in the marketplace or feedback from customers quickly without derailing a year’s worth of plans. “Just enough” planning and shipping in small, frequent increments lets your team gather feedback on each change and integrate it into future plans at minimal cost.

Popular agile software development frameworks include (but are not limited to): 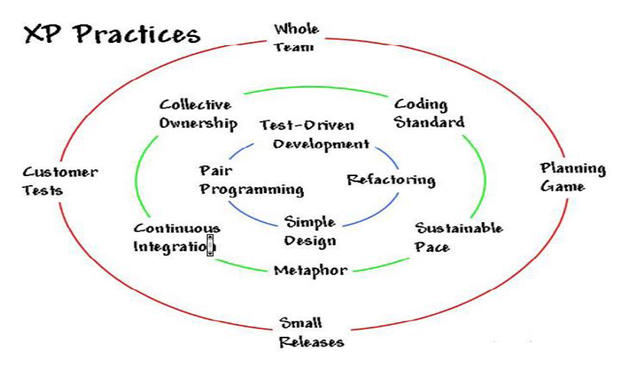 Let’s go though some of the methods in detail.

Extreme Programming technique is very helpful when there is constantly changing demands or requirements from the customers or when they are not sure about the functionality of the system. It advocates frequent “releases” of the product in short development cycles, which inherently improves the productivity of the system and also introduces a checkpoint where any customer requirements can be easily implemented. The XP develops software keeping customer in the target.

Extreme Programming is a software development methodology consisting of practices like –

Why is it called “Extreme?”

This method is focused around “designing & building” features. Unlike other agile methods, FDD describes very specific and short phases of work that has to be accomplished separately per feature. It includes domain walkthrough, design inspection, promote to build, code inspection and design. FDD develops product keeping following things in the target

Kanban is a popular framework used to implement agile software development. It requires real-time communication of capacity and full transparency of work. Work items are represented visually on a kanban board, allowing team members to see the state of every piece of work at any time.

Kanban is enormously prominent among today’s agile software teams, but the kanban methodology of work dates back more than 50 years. In the late 1940s Toyota began optimizing its engineering processes based on the same model that supermarkets were using to stock their shelves. Supermarkets stock just enough product to meet consumer demand, a practice that optimizes the flow between the supermarket and the consumer. Because inventory levels match consumption patterns, the supermarket gains significant efficiency in inventory management by decreasing the amount of excess stock it must hold at any given time. Meanwhile, the supermarket can still ensure that the given product a consumer needs is always in stock.

When Toyota applied this same system to its factory floors, the goal was to better align their massive inventory levels with the actual consumption of materials. To communicate capacity levels in real-time on the factory floor (and to suppliers), workers would pass a card, or “kanban”, between teams. When a bin of materials being used on the production line was emptied, a kanban was passed to the warehouse describing what material was needed, the exact amount of this material, and so on. The warehouse would have a new bin of this material waiting, which they would then send to the factory floor, and in turn send their own kanban to the supplier. The supplier would also have a bin of this particular material waiting, which it would ship to the warehouse. While the signaling technology of this process has evolved since the 1940s, this same “just in time” (or JIT) manufacturing process is still at the heart of it.