Why to use Thread

Threads can exist in different states which are below – 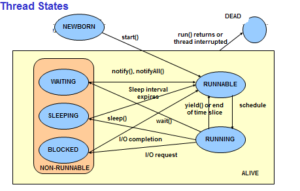 Non Runnable states : A thread can go from the Running state into one of the non-runnable states, depending on the transition.

it can call suspend and resume for blocked state.

Yield() – a thread can go from running to runnable state by calling yield() so that it can behave like a polite thread.

When a thread is executing a long loop to ensure that it is not monopolizing (control)  the system, it can call yield().

thus relinquishing (give up) the CPU. It can allow other threads to execute not being selfish.

Dead state – The thread can be dead b’cos it has completed or it has  been  terminated. Once in this state,  the thread cannot be resurrected (make active).

A new thread of execution must be explicitly started by calling the  start().

One thought on “Thread and its various states in Java”