Exception is an exceptional case that can happen in a program

An Exception occurs during the execution of a program and disrupts the normal flow of instructions.

When there is an exception

The programmer can handle the exception, preventing the program from crashing

Exception Handler is a set of instructions that handles an exception

When an error occurs, the program throws an exception

The exception object that is thrown contains information about the exception

The runtime environment attempts to find the Exception Handler

Helpful in separating the execution code from the error handler

Another part of the program can handle the exception

Exceptions are situations within the control of an application, that it should try to handle

All exceptions are represented as objects in Java

Java cannot throw any object, it can throw only Throwable objects 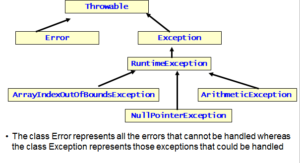 Some exceptions are thrown by the runtime

Ideally a catch block should solve the problems created by an exception so that the program can continue its execution. But very often a catch block may not be able to completely solve the problems caused by the exception. In such cases, the catch block may do a clean up operation like closing all open files, print an appropriate error message and gently exits from the program. This is far more better than the program printing a system generated error message and crashing without doing any clean up operations.

In Java, to invoke a method, the programmer needs to know the name of the method, list of parameters, the return type and the Checked Exceptions being thrown by the method.

Java syntax mandates the programmer to list all the Checked Exceptions that are being thrown from a method using the throws clause.